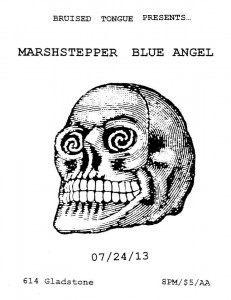 “Marshstepper is more than a just band, they are a perfect extension of the Ascetic House collective that the members have built. In Marshstepper’s case, the band has pushed beyond simply playing music and create an eerie aura at live shows that includes performance, costume and a whole lot of fog.”

be cool. respect the house.

Montreal’s Ultrathin have been hammering out their distinct take on psychedelic punk for more than a[...]

Exclaim! premieres The Yips new video for Point Dume. Shot by Travis Boisvenue who's also done v[...]
Warning: curl_setopt_array() [function.curl-setopt-array]: CURLOPT_FOLLOWLOCATION cannot be activated when safe_mode is enabled or an open_basedir is set in /mnt/xvdg/rm/var/www/sites/pierre/bruisedtongue.com/subdomains/www/html/wordpress/wp-content/plugins/alpine-photo-tile-for-instagram/gears/alpinebot-primary.php on line 382